Western Civilization II covers the political, economic, scientific and cultural events that shaped the modern history of the West (primarily Europe). This course focuses on the outcomes which emerged from scientific thought, the Enlightenment, the French Revolution, the Industrial Revolution, and both World Wars. It is a broad survey introduction to the history of Europe from the 17th century to the present day.

The exam contains 120 questions to be answered in 90 minutes. Some of these are pretest questions that will not be scored. The College Board provides the parameters for the exam which we have listed below.

WHAT YOU NEED TO KNOW ABOUT WESTERN CIVILIZATION II:

The subject matter of the Western Civilization II exam is drawn from the following topics.

Absolutism emerges when a monarch exerts absolute power to rule by ‘divine right’. Constitutional governments are limited by law and all citizens are subject to those laws.

COMPETITION FOR EMPIRE and ECONOMIC EXPANSION: 4-6% of the exam

THE SCIENTIFIC VIEW OF THE WORLD: 5-7% of the exam

The Scientific ‘Revolution’ is use to describe the emergence of modern science.

PERIOD OF ENLIGHTENMENT: 7-9% of the exam

The Enlightenment (aka Age of Enlightenment or the Age of Reason) was an intellectual movement which dominated the world of ideas in Europe in the 18th century.

REVOLUTION and NAPOLEONIC EUROPE: 10-13% of the exam

THE INDUSTRIAL REVOLUTION: 7-9% of the exam

The Industrial Revolution was the transition to new manufacturing processes in the period from 1760-1840s.

Nationalism is a concept involving a shared communal identification within a nation. The mid 19th century to the early part of the 20th saw a rise in nationalism across Europe.

THE FIRST WORLD WAR and THE RUSSIAN REVOLUTION: 10-12% of the exam

EUROPE BETWEEN THE WARS: 7-9% of the exam

THE SECOND WORLD WAR and CONTEMPORARY EUROPE: 8-10% of the exam

Each college sets their own credit-granting policies for the exam, so check with your college admissions office, test center, or academic adviser before taking the test. 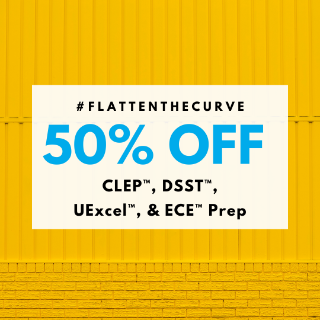 In light of the current situation, we are discounting all our online courses to help displaced students during this challenging time.